8-8 Quote of the Day: How do you make people feel? 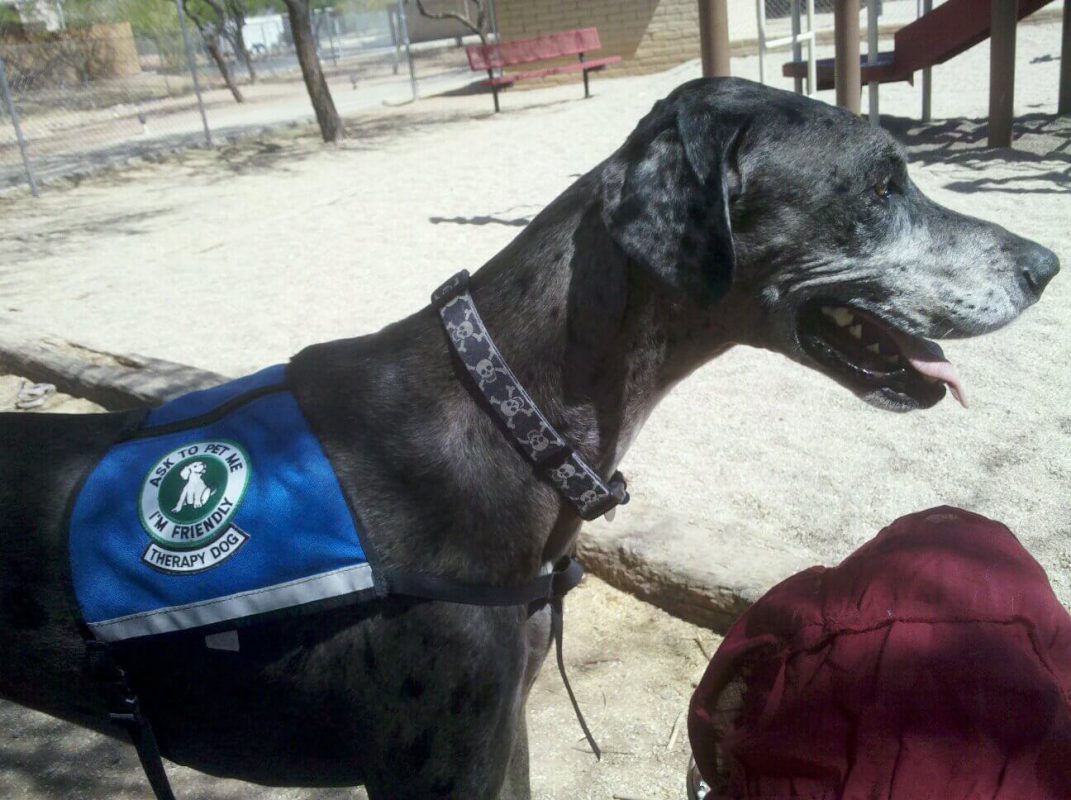 Animals can be extremely calming for a person who has experienced trauma or has remembered a horrible experience that happened to them.

Detectives and police officers often find it difficult to get witnesses to relive the details of their trauma, which can sometimes make prosecution impossible. When I was working with children in Arizona (who had been taken from their homes, often for horrible reasons), these children occasionally needed to testify about what he or she witnessed or experienced that caused their displacement. Some of these children would become angry, deny anything took place, become tearful, frightened, or just shut down and become silent. This is where therapy dogs come in. Therapy dogs serve several purposes including providing emotional support for children who have not only experienced trauma but have the added stress of being the key witness in a legal proceeding. Let me share just one of many success stories that took place with my former clients and my therapy dog, Goose.

One morning (after picking up a child from a group home), Goose, the child, and myself arrived at the justice center for the child’s appointment. At the time Goose was there simply as my service dog, although she was also a certified therapy dog. The counselor had asked the child what he witnessed the night – that his mother had been beaten in his home and his uncle had been shot outside his home. The intent of this meeting was to understand what he had experienced, how it had impacted him, and to develop a plan for treatment in addition to assisting with the investigation of the events. We entered a room filled with toys, games, puzzles, beanbag chairs, coloring books, and picture books scattered around a blue table and three small chairs. Goose and I were also in the room only as support and not to ask any questions.

After 45 long minutes, the counselor had only been able to receive a few nods of the head to mundane questions and was no closer to discovering what the boy had observed, or how he felt about the traumatic event. The counselor told the boy that she was going to leave the room for a few minutes. When the counselor rose and left the room, a transformation occurred. The door remained open, and I was standing near the doorway, but Goose went into the room and laid down next to a bean bag chair about halfway between myself and the boy. She did not immediately join him, rather she seemed to invite the child to join her, without demanding it. All of the sudden, I could hear some tearful mutterings from the boy who was curled up on the bean bag chair next to Goose. I realized something that I will never forget. While nervously folding and refolding her leash in his hands, he was telling Goose what happened to him that horrible night. He told Goose how it made him sad and scared – so scared that if he told anyone, it would happen to him again. He explained how his family said never to trust police officers. And finally, about the fear of when he closed his eyes, all he could see were dark blue circles, and the loud noise of the bullets, and his mom screaming.

I must have made some kind of noise of shock but the counselor suddenly appeared. I quickly stopped her at the doorway to witness what I was hardly able to believe was happening. The two detectives peered around the corner as well. For almost an hour, the child stayed there with Goose, unaware of our presence and completely engaged in this relationship. He stroked Goose’s head and played with her ears. Occasionally, he laid his chest over the top of her body, and every now and then Goose would look over gently and connect with his gaze, maybe lightly press her nose against his cheek as if to say, “It’s okay, I am still listening. I am still here. Keep going.” Then as if by some imaginary cue he looked over at me, Goose stood up and walked back over to my side and the moment was over. He had said everything he needed to share and Goose had listened to every word. No one made her sit there. No one made the child tell her what was on his mind. I remember feeling like I was a guest in some kind of intimate miracle and my gift was witnessing it because, otherwise I would have never believed it.

As with all “miracles” they are hard to replicate. The child did not share any more information with the counselor that day, nor even that next week. Goose and I picked him up three more times for the same type of meeting, but none of them prompted the same interaction between the boy and Goose. Goose remained at my side and focused on her job of helping me, and the boy was uninterested in petting her. Finally at the third appointment, I asked the counselor if Goose and the child could be close and we would follow them but just merely observe. The boy walked into the room and chose the bean bag chair, then Goose came in and stopped by my side and looked up at me for approval. I nodded my head and she walked over and stood next to the chair. He pet her and then I asked if it was okay if we came in the room and he said yes. At that point the counselor began to ask the boy what Goose thought and felt about the incident with his mom and uncle, rather than how he felt about it. It worked. He was able to share details, feelings, emotions, fears, hopes, and descriptions, all while petting Goose. His breathing remained somewhat relaxed throughout his recount of the event and when he did become emotional Goose would take a step closer and lean in and when he recovered she returned to a distance where she was available but not a distraction.

These moments, like the one described above, have forever changed the way I see witness interviews. Programs like Courthouse Dogs have been formed to make dogs available to witnesses and individuals who benefit from the support of a canine during their statements or during appointments with social workers and counselors. Since organizations like this have been founded, there have been more instances of canines taking part in clinical therapy sessions and counseling in the years following. Therapeutic interactions like this one are the reason why we decided to offer canine therapy in our own counseling office. Now our clients can benefit from a positive therapeutic interaction with a canine during their counseling sessions. This may be particularly helpful for children or for anyone who has experienced trauma or has difficulty expressing their feelings and emotions.

A Powerful Expressive Writing Exercise to Empower Yourself: Avoid Self-Sabotage

How Expressive Writing Can Help Build Your Resilience

Photo by Guilherme Stecanella on Unsplash

The Anatomy of Peace- a poem